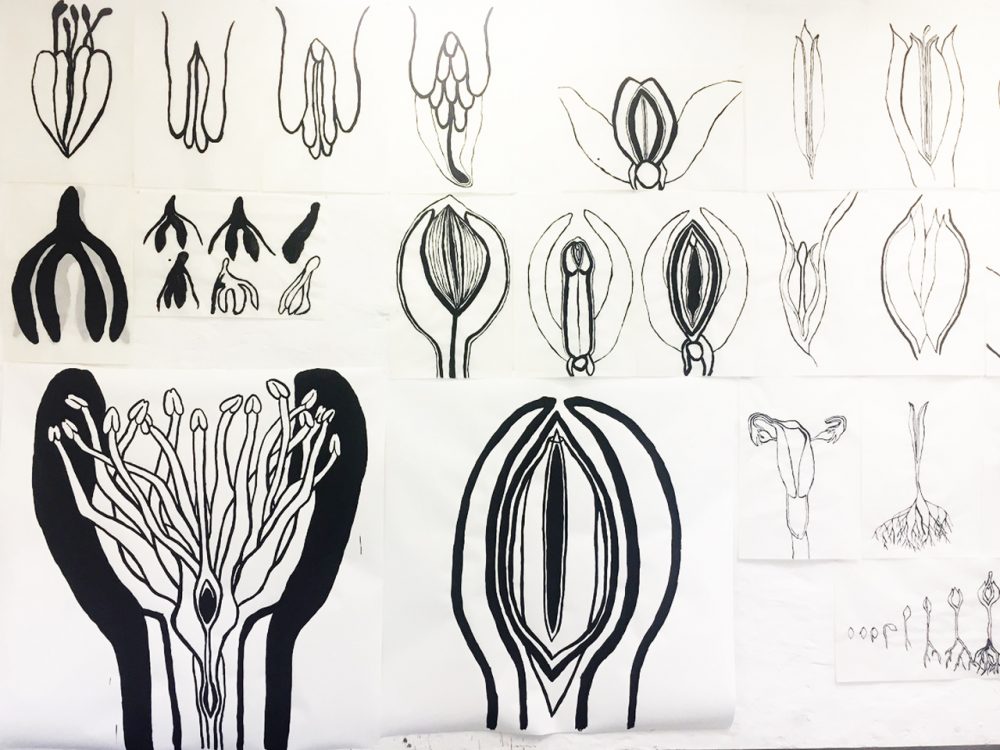 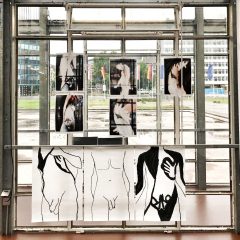 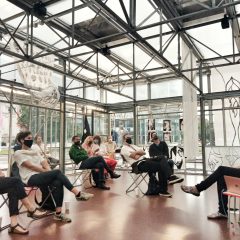 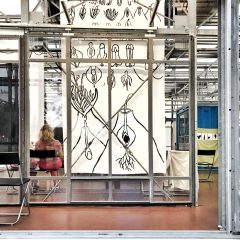 For one week, Sofia Lomba und Wolfgang Mayer, two artists part of the interdisciplinary collective Discoteca Flaming Star,  will work “corona-distanced” on their individual drawing techniques. Stirring with their drawings and accompanied by the sounds, musik and thoughts of the other collective members Sara Pereira and Cristina Gómez Barrio, they make art for each other and the audience in an open work situation.

Sofia Lomba, born in 1984 in Porto, swings between drawing, performance, video and music. She works around and with body identities and transformations, turns vaginae into volcanoes, volcanoes into vulvas, vulvas into hearts, hearts into beetles, beetles into penises. She collaborates with the DFS collective and has embodied since 2015 the semi-fictional character Ingrid on video and live. Sofia has worked with João Alves-Thundera, appeared with Wojciech Kosma as part of The Family, and starred in Graw Böckler’s videos, among others. Together with Sara Pereira, she founded in 2016 AVA, a non-binary shamanic beat drone Blade Runner hypnotic lullaby Lana Keller improvisation band. She lives and works in Berlin.

Wolfgang Mayer was born in 1967 in Wertach, Allgäu, Germany, as the illegitimate child of Bonnie Tyler and Klaus Kinskiss Avatar. He studied at the Academy in Munich, at Bar d’O in NYC and with Ron Clark at the Whitney ISP. He works primarily with illustration, make-up and video. In 1998, he founded with Cristina Gómez Barrio the performance collective Discoteca Flaming Star, which creates spaces for experiments and repressed memories.

Attention when it rains there are only a limited places in the building.

Respect the masks and hygiene regulations in the buidling.

On the last evening, Wolfgang Mayer will speak about “Selbst / Portrait / Selfies (1988-2020)”, in a lecture covering works of Michael Buthe, Claudia Gienger, Sofia Lomba, Ana Mendieta, Michael Schultze, Rembrandt, as well as his own works.

„With the portrait – with its ways, its manners, its eclipses and its ruins, the fate of the figure, in general, is played out: of representation, of fiction, therefore of presence and truth; of the face, of presence and absence; of the other, of its proximity, of its distance. In the portrait, the possibility for us to be present is redrawn, withdrawn, and replayed very noticeably before our eyes.“