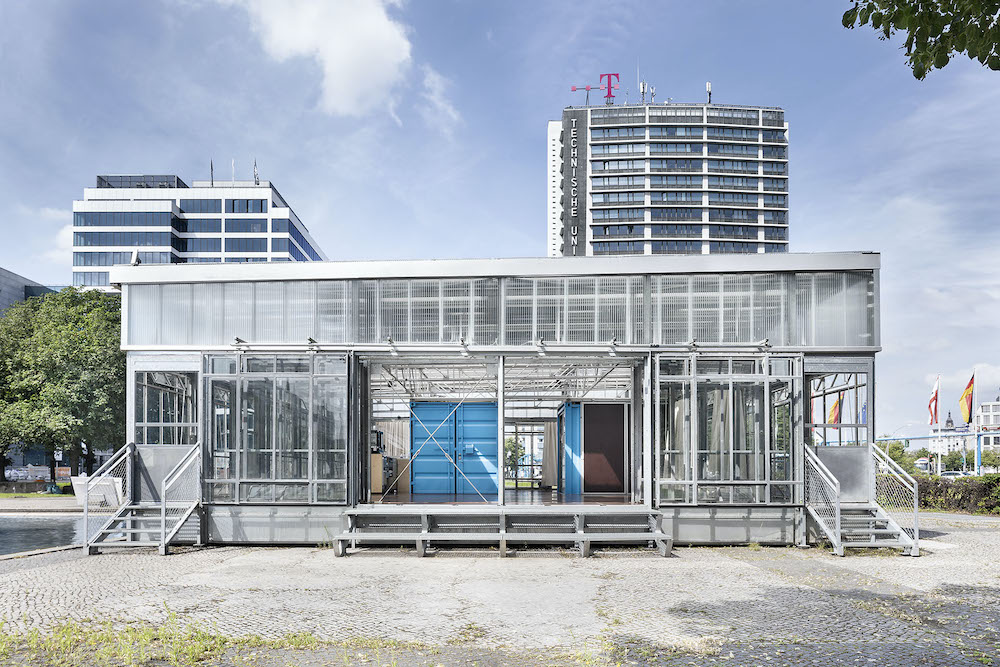 The BHROX bauhaus reuse is a new transdisciplinary center and public urban laboratory for education, research, best practice and performative projects.
The BHROX works “transdisciplinary” according to the principle of a real-lab. The offer is public and low-threshold and enables projects in exchange and at eye level between theory and practice, civil society and science.
In the coming years, BHROX will address sustainable urban development, modernity, building culture, politics and society, and cultural practices in urban space.

The glass building bauhaus reuse (BHR) consists of reused [reuse] façade elements from the Bauhaus Dessau, from its major post-war renovation in 1976.

The construction of the pavilion itself was created as an educational project, as a so-called “Lehrbaustelle”, with apprentices from different trades. Under the title “Education Bauen Bauhaus”, transdisciplinary practical projects – with academic and professional participants – are also part of the BHROX program.

The name bauhaus reuse refers not only to the reused façade elements, but also to the principle of “building site” and “stage” as a transdisciplinary environment for education, research and practice. In this sense, bauhaus reuse stands for the reuse and the further thinking of modernism: “Heritage of Modernism – Future of the City”.

The BHROX bauhaus reuse was founded by zukunftsgeraeusche (zkg) and is funded by the Berlin district Charlottenburg-Wilmersdorf. The building was realized with the support of the Bauhaus Foundation Dessau, the Bauhaus Archive Berlin, the IKEA Foundation and the district as well as numerous sponsors.The BHROX is the location for the “Stadtlabor 2050” in the district and pilot platform for the “Campus Charlottenburg” in cooperation with TU Berlin and UdK Berlin.

Platform, formats, capacity, cooperation
In the last three years the BHROX has been established as a public project platform, workshop, event location, stage and multimedia studio.
The program includes hybrid, digital (live stream) and presence formats for: Exhibitions, discursive events, symposiums and conferences, workshops public labs and field studies (surveys), seminars and educational projects (academic and/or practical), art projects and performative productions.
The capacity reaches from small groups up to indoor events of 100 people and larger events – by including the surrounding outdoor areas and using the pavilion as a stage, an audience of 200, 500 or more people can be involved on site.
The BHROX bauhaus reuse works with the Berlin district and senate administrations, with universities, vocational schools, partners from culture, civil society, business and funding.
Within the inter- and transdisciplinary cooperation structure, projects and events are professionally developed and implemented that deal with current issues and approaches for sustainable development and represent fundamental values such as sustainability, participation and inclusion.

Location / site specificicity
The bauhaus reuse was re-built at the «Ernst-Reuter-Platz» in 2019. The island of the roundabout is 130 meters in diameter, with an area of approx. 12,250 square meters. The place is a major example of post-war urban development in West Berlin and a garden monument of Modernism, designed by Werner Düttmann, built 1959-1960.
The BHROX and the listed central island enter into a symbiosis for the time of their co-presence. The aim of the BHROX is to increase the appreciation for the place and Modernism at large, by the program and practical measures for renovation according to the guidelines for monument protection.
Before that, the bauhaus reuse was developed on the premises of the Bauhaus-Archive Berlin from 2015 to 2018, where it was a temporary extension until construction began for the new museum wing.

Topics, current program and projects
The introduced topics at BHROX are sustainable urban development, Modernism, Baukultur, politics and society and cultural practices in urban space.
Within, topics of special interest are «Social Cities and Climate Protection», «Modern Emancipation», «Democracy and Baukultur», circular society and the future of education and labor. Cross-sectional topics are transdisciplinarity, performativity, heritage and development of Modernity – as well as a transnational exchange with focus on Central and Eastern Europe.

Sustainable Urban Development
The «Urban Lab 2050» links three municipal sectors of sustainable development – (1) green energy, (2) urban mobility, (3) housing, trade and public space – through model projects and with public dialogue formats. Current program formats are the «Sustainable City Ideas Forum» and the new best practice talk series «Building Best Practice». The «Campus Charlottenburg» is a beacon project to promote dialogue between science and the public. A series of stakeholder workshops at BHROX in 2021 marks the start to initiate new transdisciplinary projects. An exemplary project is the model and research project «Milieu protection vs. climate protection?» developed at BHROX in cooperation with the TU Berlin, the Berlin Districts of Neukölln and Charlottenburg-Wilmersdorf, funded by the German Federal Environmental Foundation.
Cultural Practices in Urban Space With the glass pavilion BHROX, a relatively Corona-resilient cultural site has emerged that fosters new works that stimulate a performative examination of the zeitgeist in the pandemic and urban space. One of the programs is «DANCING ON ERNST-REUTER-PLATZ», which, under the circumstances of the pandemic, initiates public dancing as an optimistic act of togetherness and especially includes people with disabilities. The program «THE ONLY ARTIST – PANDEMIC ESCAPE» enables – with the transparent space in public space – the production and realization of art and performance projects at the same time «isolated» and in front of a public audience.

Transdisciplinary education
The BHROX is a space for seminars and workshops in cooperation with the universities TU Berlin and UdK Berlin. Furthermore, cooperative seminar projects are developed and offered. In summer 2020 seminars on the history and future of Ernst-Reuter-Platz took place, in winter term 2020/21 at UdK Berlin a seminar on Werner Düttmann‘s work, which culminates in the exhibition «Berlin is many cities.», which was shown at BHROX for the «Rundgang» 2021 of the UdK Berlin.
With the motto «Education Building Bauhaus», the BHROX offers practical education in sustainable building and heritage protection. Following the construction of bauhaus reuse as «educational construction site» with apprentices of the Knobelsdorff-School Berlin, the activities will be continued with an internship program. A next educational best practice project is the renovation of street furniture on Ernst-Reuter-Platz in accordance with guidelines of monument protection.

Modernism, Society, Politics, Baukultur
Main topics at BHROX are societal emancipation, women‘s emancipation and gender equality under the title «Modern Emancipation» – among others in cooperation with the Center for Interdisciplinary Women and Gender Studies (ZIFG) at the TUB – as well as the development of Modernity and democratization from a transnational perspective on Central Europe, started with the festival «re:bauhaus» in 2019. This includes the topic of «Politics and Baukultur» on the responsibility of Baukultur for democratic development. The next activities for «Modern Emancipation» will take place as part of the «Women in Architecture» festival, within the BHROX shows the exhibition «Frau Architekt*in» by Berlin Architecture Museum, Berlin Chamber of Architects and TUB. In addition, the BHROX curates a side program with feminist audio walks by «fem_arc» (UdK).
For the festival «Triennale der Moderne», the BHROX is a hub for transnational events in Berlin. The festival founded in 2013 in the cities of Berlin, Dessau and Weimar, includes large and small institutions within a bottom-up network. For the Triennials in 2022 and 2025 a European network project is planned with partners from Central and Eastern Europe.