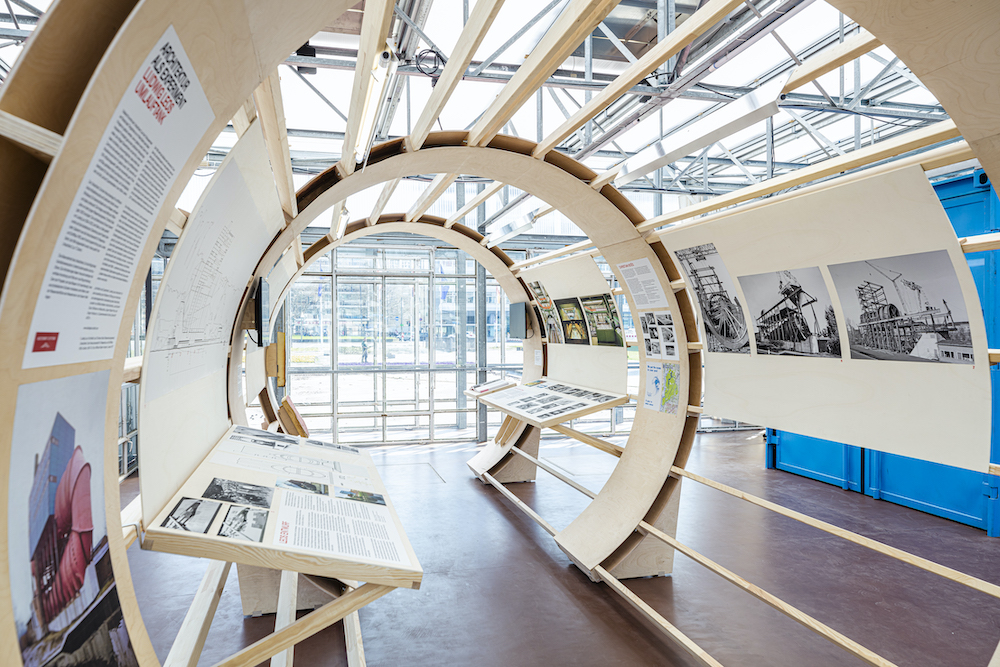 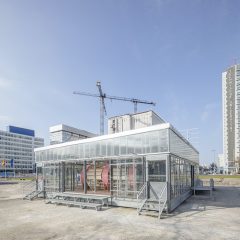 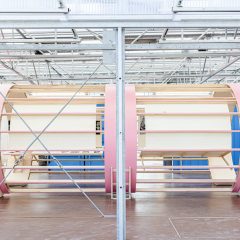 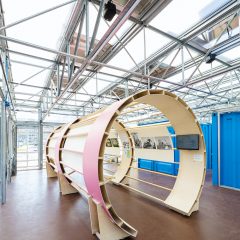 An exhibition by the Wüstenrot Foundation to mark the completion of the restoration of the circulating tank in accordance with the preservation order, curated by BARarchitekten (Antje Buchholz, Jack Burnett-Stuart, Michael von Matuschka, Jürgen Patzak-Poor) and Gregor Harbusch, in cooperation with the magazine ARCH+. The exhibition in Berlin takes place in cooperation with BHROX bauhaus reuse.

The corona crisis not only leads to the cancellation and postponement of events, but it also requires surprising interim solutions: starting today, the curators are building their exhibition “Architecture as an Experiment. Ludwig Leo’s Umlauftank” in the BHROX bauhaus reuse on Ernst-Reuter-Platz for a few days to enable photographic documentation for a publication.

The exhibition represents a good occasion for a virtual tour – before the exhibition can hopefully be opened on September 24. The spectacularly blue and pink towering Umlauftank 2 – a circulation tank – on the Straße des 17. Juni in Berlin is an icon of experimental design in international late modernism. The facility for naval pilot projects functions similar to a wind tunnel – yet with water. Conceived in the mid-1960s by the young engineer Christian Boës and designed by the architect Ludwig Leo as part of an artistic direction, it officially opened in 1974. From the very beginning, the Umlauftank 2 (UT2 ) was not just a fascinating machine. Leo’s design was always also a projection surface and a pledge – an architecture rich in associations and complex, capable of provoking irritating aesthetic experiences and infinite meanings.

“Architecture as an experiment” uses largely unknown historical photos and plans as well as three newly produced films to portray the technical and historical context, the architectural design process and the restoration of UT2 as a listed building. The exhibition is based on the hypothesis that UT2 could only be built in West Berlin of the Cold War the way it was. Because of the political revendication of the insular frontline city along with the necessary subsidies, and the courage for a radical architecture, it was made possible to build, in the middle of the city centre, the world’s largest facility of its kind for ship technology pilot tests to date.

In autumn 2017, the Wüstenrot Foundation completed the restoration of the building in accordance with the preservation regulations, which was carried out by the offices of HG Merz and adb Ewerien und Obermann. Since then, public attention has again been focused on the UT2 and its historical context of origin – and thus also on the social value of experimental thinking. Indeed, the Umlauftank 2 tells of a Berlin that is astonishingly far in the past and which today – given the new conservatism in Berlin architecture since 1989 – is increasingly understood as a place of longing for an experimental late modernism that emerged locally and was able to set international standards. Part of the exhibition is the 45-minute animated film Ludwig Leo Werkfilm, which shows seven of Leo’s projects from 1956 to 1973 using assembled and digitally animated archive material from the Baukunstarchiv of the Akademie der Künste in Berlin. The focus is on Leo’s complex drawings from the 1960s.

Exhibition by the Wüstenrot Foundation to mark the completion of the restoration of the UT2, curated by BARarchitekten (Antje Buchholz, Jack Burnett-Stuart, Michael von Matuschka, Jürgen Patzak-Poor) and Gregor Harbusch, in cooperation with the magazine ARCH+.

Parallel to the exhibition, Spector Books is issuing the bilingual (German/English) publication “Ludwig Leo. Umlauftank 2” by the Wüstenrot Foundation. It is dedicated to the process of restoration and sheds light on the role of monument conservation for modern buildings.