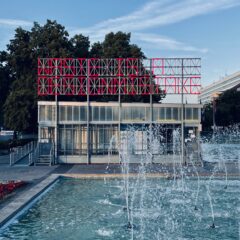 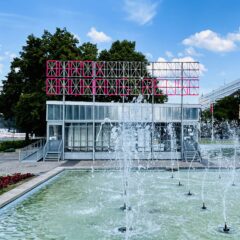 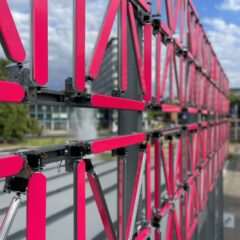 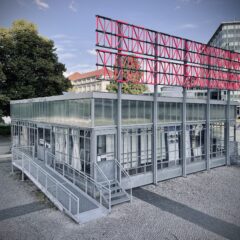 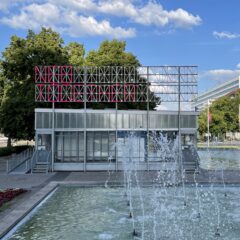 THE FESTIVAL, Side Event

re:klame is an art and media installation by zukunftsgeraeusche at BHROX bauhaus reuse. The experimental media installation consists of 26 changeable letters, each with twelve individual segments that are electrically controlled and illuminated, and is a reference to early digital segment displays and historic modern display boards and neon billboards.

The name re:klame refers to the German word “Reklame” (from French “réclamer”), which was coined for public advertising with the onset of modernism, as well as to the English term “to reclaim,” which stands for the act of participating in an essential sphere of interest – in this case, the sphere of public as well as artistic discourse about the sustainable development of cities and society and the legacy and future of modernism.

The media installation re:klame refers to the aesthetics of modernism, in which advertising art emerged as a new form of design and expression. As an avant-garde with numerous models in European and international design development and artistic education, it was formative in art, advertising and communication media and, among other things, also part of the teaching program at the Bauhaus, introduced by Herbert Bayer in 1925.

The installation re:klame has a special local connection to Ernst-Reuter-Platz and its history in Berlin and in a divided Europe before the fall of the Iron Curtain. In the 1950s, Ernst-Reuter-Platz was urbanistically redesigned in the spirit of post-war modernism. The newly constructed surrounding buildings bore large neon or illuminated lettering of well-known Western brands, as a kind of urbanistic showcase of West Berlin prosperity, reflecting the state of future ideas and innovation at the time. Today, the buildings around Ernst-Reuter-Platz bear current brand names and names of local companies and institutions, with much of the original illuminated lettering having been replaced. With this reference, the installation associates and contrasts the medium of public advertising and the historical model with a critical, contemporary interpretation with text art and messages for a sustainable future and for green innovation.

The media installation re:klame is carried by the display board on the BHROX bauhaus reuse building and addresses the public in Berlin and beyond. The BHROX is located on the central island of Ernst-Reuter-Platz in Berlin, which is circled daily by more than 60,000 vehicles as well as thousands of cyclists* and pedestrians. In parallel, the text installations and messages on display are communicated and shared online and via social media.

re:klame shows digital messages, comparable to a Twitter post, directly in public space. In the process, messages from a trans-European network and discourse space are likewise contributed to the sustainable future of the city and modernity. The installation is thus an innovative, digital, networked medium for transnational, public discussion and live communication. The installation promotes exchange and collaboration across borders and long distances, with the simple digital/online contribution of messages helping to save energy and reduce emissions, while enabling a shared local presence – which in turn gains visibility beyond the site.

Last but not least, given the heavy car traffic at the site, the installation in this sense also clearly addresses an issue that is not only obvious to the local site: the urgent need to reduce traffic, with internal combustion engines.

The media installation and scoreboard construction are also made possible with the kind support of: PohlCon (and tba)

THE FESTIVAL, Side Event