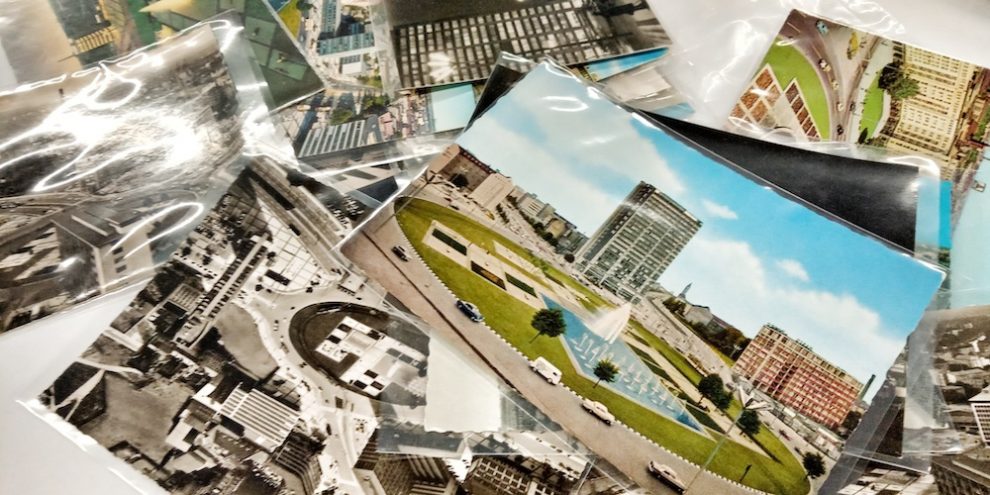 Sitting again at last
The restoration of the square furniture on Ernst-Reuter-Platz has begun. Since the beginning of May, BHROX bauhaus reuse has been working with the Knobelsdorff School and specialist companies to ensure that visitors can once again sit on Ernst-Reuter-Platz in the summer.

To accompany the project, BHROX bauhaus reuse is producing a podcast that deals with the renovation of the building, the design by Werner Düttmann, and the history of Ernst-Reuter-Platz, as well as examining the bench as an object of cultural history. The articles are made accessible via QR codes at the benches.

Ernst-Reuter-Platz
Ernst-Reuter-Platz is a special place of post-war modernism and Berlin’s urban development. As a showcase project in post-war Berlin, in distinction to the Nazi past and East-West axis planning on the one hand and as a counterpart to the reconstruction in East Berlin on the other, the square was created according to an urban planning concept by Bernhard Hermkes from 1955. With an open space and square design by Werner Düttmann, which makes up today’s garden monument on the central island, it was completed between 1959 and 1960.

Square furniture – benches
Current: Foundations under the restored pedestals will be poured next week
The authentic plaza furnishings include 16 benches, each with two wooden supports supported by two exposed aggregate concrete pedestals that cantilever out on both sides. The pedestals are embedded in the ground as foundations and are still original. The bench supports were no longer preserved and have since been replaced by temporary ones. The restoration, which is in accordance with the preservation order, includes the pedestals and the restoration of the bench supports. The pedestal work will be implemented by specialist firms, with alignment of the partially skewed pedestals, cleaning of the exposed aggregate concrete surfaces and concrete repair of cracks and spalling.
The reconstruction of the bench supports will be manufactured and installed by apprentices of the Knobelsdorff School as an educational project. The supports, originally made of extra-wide pine planks that are no longer common today, are deviantly made of larch wood, and the brackets between the bases and the seat are made of steel, for increased durability.

The restoration of the square furniture in accordance with the preservation order was initiated by the BHROX bauhaus reuse on Ernst-Reuter-Platz and is part of the specialist practical education program Bildung.Bauen.Bauhaus at the BHROX, as a teaching construction site with the Knobelsdorff-Schule Berlin.
The project is led by zukunftsgeraeusche GbR at BHROX bauhaus reuse, in cooperation with and supported by the district of Charlottenburg-Wilmersdorf, accompanied by the Lower Monument Protection Authority, and with guidance and support from the Berlin State Monuments Office.