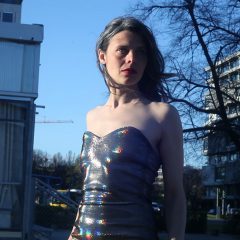 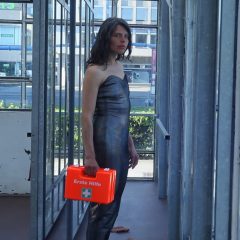 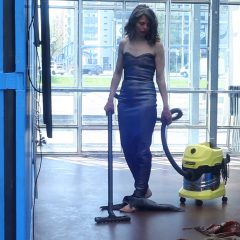 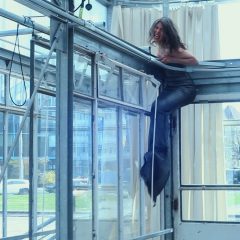 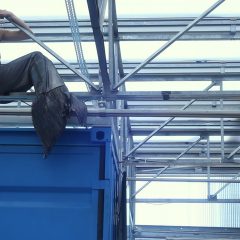 During her work residency at BHROX, Evy Schubert will create the nano-series “I’ve seen a mermaid! 4 real!” (AT) consisting of three episodes of one minute each. This nano-series is, as it were, the conclusion of a larger film series that was launched on the website www.katastrophehatchance.today at the beginning of Evy Schubert’s contact freeze. From 21.3.-19.4.2020, a new video of approximately one minute by ever-changing artists* will be uploaded daily on www.katastrophehatchance.today, which deals with this special time of the state of emergency. In “I’ve seen a mermaid! 4 real!” (AT) a woman, played by Margarita Breitkreiz, has become a mermaid during quarantine and is now at the mercy of the transparency of the glass building. One would like to make contact, but the cars keep driving, in circles, she is only observed and greeted as they pass. The human closeness remains absent, result of our crisis, until everything explodes.

Evy Schubert, director and video artist. She works at the intersection of theater, film and text. Former assistant director to Dimiter Gotscheff and Herbert Fritsch at the Volksbühne am Rosa-Luxemburg-Platz Berlin.

Her video “Le monde tombé” emerged as the winning film at the Facade Video Festival, Bulgaria. For her cinematic chamber play “Dominus Dixit”, supported by Volksbühne am Rosa- Luxemburg-Platz Berlin, Evy Schubert received the “Award for Harmony between Content and Form” at the 15th International Kansk Film Festival Russia, after which she was invited to participate in 2017 with a cinematic retrospective. Other films such as “No Ghosts He Called” have been screened at film festivals worldwide. She has received grants from the Berlin Senate, the Berlin Theatertreffen/ Haus der Berliner Festspiele, the Goethe Institute Novosibirsk, and the Kolleg Friedrich Nietzsche for the promotion of young philosophers, among others. World premieres of her theater texts “Westend” and “Golden Affairs” at Ballhaus Ost, Berlin. Further productions at the Parkaue – Junges Staatstheater Berlin, Landestheater Niederösterreich St. Pölten, Schauspielhaus Vienna, among others. In addition to her productions, Evy Schubert works as a dramaturge for Herbert Fritsch at the Burgtheater Wien, Schauspielhaus Zürich and the Schauspielhaus Bochum. As a dramaturge, Evy Schubert distinguishes herself by the fact that her program booklets are exclusively illustrated as art books. She is also a lecturer at the University of the Arts, Faculty of Performing Arts, Berlin.

Margarita Breitkreiz came to Germany after the fall of the Berlin Wall in 1994. In 2006 she completed her acting studies at the Academy of Dramatic Art “Ernst-Busch” in Berlin, where she also lives.

In 2004 she played a leading role in the successful television film “Der Grenzer und das Mädchen” by Hartmut Schoen with Axel Prahl.

In addition to leading roles in episodes of “Rosenheim Cops,” “Polizeiruf 110,” the RTL crime series “Abschnitt 40” and the Tatort episodes “Unsterblich” and “Das Mädchen in Galina,” she has played other roles in short films, such as “Weggang” (2004, directed by Clemens von Wedemeyer) and “Russische Frauen tragen gern kurze Röcke. In the 2016 film “Marija” by Michael Koch, she played the titular lead role.