THE ONLY ARTIST #19 Margarita Wenzel
Lichtspiel/-theater 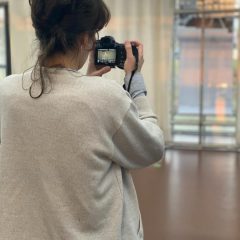 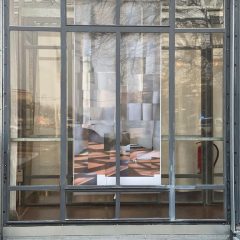 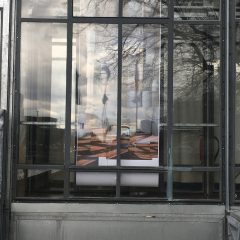 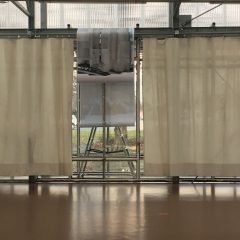 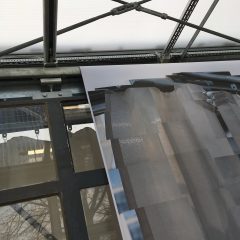 THE ONLY ARTIST #19 Margarita Wenzel

During a week spent at bauhaus reuse, Margarita Wenzel tried to capture the play of light that spans between the interior and exterior spaces. With the help of the curtains, which represent an additional optical element and make both visible and invisible, she recorded various light situations and combined them into two images. As in a mosaic, all directions and times of day appear next to each other in the textile folds, uniting square and flowing forms that once again – but in a different way – fit into the space.

Due to the glazed, reused structural elements, the pavilion on Ernst-Reuter-Platz in Berlin is both reflective and visible, becoming a reflective surface and at the same time a stage. The gaze is guided by the uniform shapes and gently passes through the double walls. From the inside, on the other hand, one gazes upon an unsteady environment: a carousel of the metallic surfaces of cars or their lights at night.

By means of long exposures, the cyanotype or also the wet plate process, light conditions can be represented as they would otherwise not be perceivable to the human eye. At the same time, they remain comprehensible and rather question the demarcation between the visible and the invisible.

The photographs, which are taken during the day and at night in the pavilion using various photographic techniques, can be developed on a daily basis and then exhibited in the room in digital and analog form. In this way, the Bauhaus architecture becomes not only a pictorial motif, but also an exhibition site. A pictorial installative “doubling” of the space is created and at the same time the circumstances are changed, which determine the new photographs. This process describes a “play of light/theater” that can be observed both in the pictures and in the pavilion itself.

In 2020, Margarita Wenzel completed her master’s degree studies with Prof. Julia Kröpelin at Burg Giebichenstein Kunsthochschule in Halle with the photographic, drawing work “Kadragen”. As a further development of her diploma thesis “As far as the eye can see” from 2018, in it she performs an artistic examination of the view from above, in which she breaks open optical self-evident facts and analytically penetrates spaces.

Margarita Wenzel’s working method involves a great deal of research; however, she always makes connections and expresses herself in a remarkably versatile manner, both conceptually and in terms of artistic implementation.

Before coming to Burg Giebichstein Kunsthochschule, Margarita Wenzel studied fine arts at the Bauhaus University in Weimar and received the Bauhaus-Essential-Preis for her intermediate diploma. Before that, she attended the Minneapolis College of Art & Design in the USA for one semester. She spent several years of her childhood with her parents in Iran, which shaped her view of cultural idiosyncrasies. Currently, she is striving for an artistic journey to the moon, which is supported by the Burg Giebichenstein Graduate School.